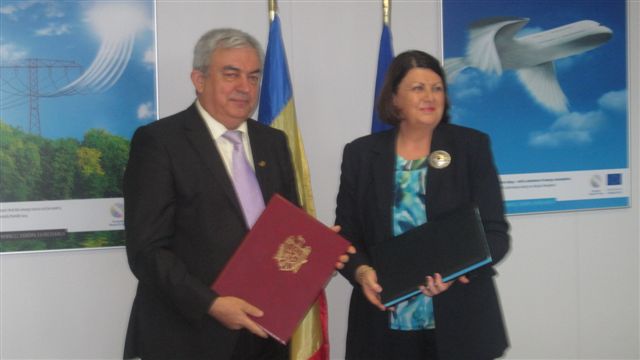 The European Union and Moldova has today forged closer ties on research and innovation.  Máire Geoghegan-Quinn, European Commissioner for Research, Innovation and Science and Acad. Gheorghe Duca, President of the Academy of  Sciences of Moldova, has signed a Memorandum of Understanding for the association of Moldova to the EU’s Seventh Research Framework Programme (FP7).

This will allow Moldovan scientists, research institutes, universities and companies to collaborate with their counterparts across European key research areas, while strengthening their own research expertise and capacity. In practice they will compete for research funding on an equal footing with counterparts in EU Member States.

Commissioner Geoghegan-Quinn welcomed the signature of the MoU, stating “The agreement today is only the beginning of a long-term partnership that will benefitMoldovaand the rest of the European scientific community. Together we can tackle the big challenges that face our societies like better healthcare, greener transport, and energy security.”

Increased sectorial cooperation with Moldova and the other countries of the Eastern Partnership and the broader European Neighborhood Policy region, through the facilitation of their participation in EU programmes, is a key aspect of the recent communication ‘A New Response to a Changing Neighborhood’ issued jointly by the High Representative of the Union for Foreign Affairs and Security Policy and the European Commission.

The Republic of Moldova becomes the 14th country associated to FP7 belong the others, such as: Albania, Bosnia and Herzegovina, Croatia, the Faroe Islands, FYROM, Iceland, Israel, Liechtenstein, Montenegro, Norway, Serbia, Switzerland and Turkey.

Association is the strongest form of international cooperation in research and innovation between non-EU countries and the EU.  The Republic o fMoldova will become formally associated to FP7 from the 1 January 2012.  In practical terms Moldovan researchers will be associated for all of the FP7 calls which are currently open, as these draw on the budget for the 2012 financial year.